As Artistic Director of The Vagrancy I helm our annual new play reading series, BLOSSOMING, as well as hire The Vagrancy Playwrights’ Group. 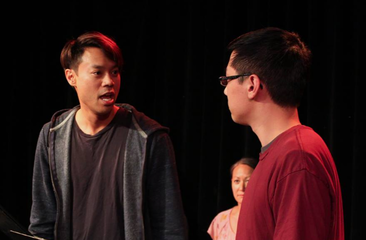 The Vagrancy Playwrights’ Group is a cohort of writers tasked with the goal of developing full-length plays for production. The Vagrancy annually selects a core group of five playwrights representing the diverse perspectives and voices of Los Angeles.

Beginning each fall, the writers meet regularly throughout the year as they craft their plays. The Vagrancy hosts two mid-year development workshops wherein the plays are explored with actors and a director in a rehearsal setting with the playwright. As with the writers, the actors represent the breadth and diversity of Los Angeles. During the workshops, the playwrights are encouraged to take risks and stretch the bounds of theatre in an attempt to continue pushing the art form forward.

The process culminates each summer with BLOSSOMING, a weekend of staged readings of each of the plays performed before an audience. The Vagrancy then selects one of the plays for Play Date, an extended ten day intensive workshop which takes place the following winter.​

2014
The Tale of a Girl by Annette Lee
Dolls of America by Boni B. Alvarez
Falling Slanted, Sad & Crazy by Chelsea Sutton
The Nightmare Room by Cort Brinkerhoff

2013
The God Particle by Annette Lee
The Bomb Plot by Cort Brinkerhoff
Marabella by Boni B. Alvarez
H.A.P. by Chelsea Sutton
She Cries Rivers of Diamonds and Dust/
While the Sky Bleeds Flames/ and the Earth Hums a Lullaby by Donald Jolly