"With quick-witted writing and a high-octane cast, OSD is the perfect nighttime outing for Angelenos in need of a comic escape." P.P. – LATF 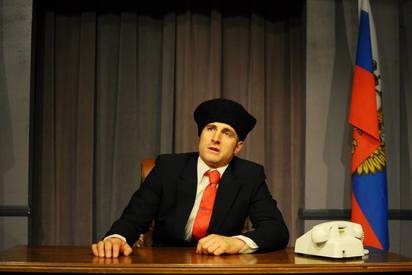 With the Winter Olympics upon us, and recent attempts to reign in NSA spying, the time is ripe for musical comedy with a Russian accent. And that’s what Obama Spy Drama, the new show from City in a Swamp Productions, provides in abundance. Along with musical parodies, the satire playing at Acme Comedy Theatre is filled with spy agency intrigue, romantic complications and a display of international muscle.